Realizing the roads of the future

Roads encircle the globe in arterial networks that seem more pervasive each year. To some, they are a sign of progress; to others, they are a growing scar on the landscape. The United States alone hosts millions of miles of asphalt pavements, materials that aren't particularly sustainable or good for surrounding ecosystems. Yet the United States and many other nations keep building and replacing the same sorts of roads year after year, using the same basic design that’s been around for centuries. 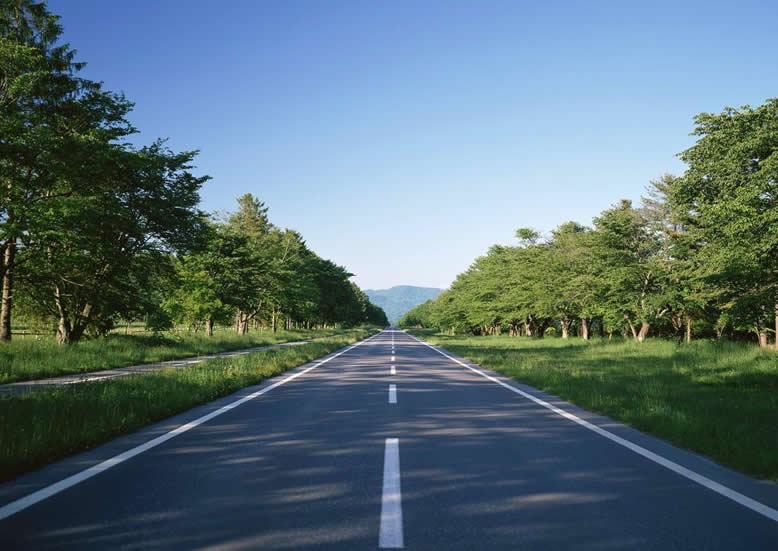 Despite humanity's road-making rut, asphalt pavement upgrades are certainly possible. In recent years, researchers have started to work on a range of refinements that could make highways safer, quieter, and more sustainable. Modifications could include changing the aggregates and binders in the pavement or adding recycled materials into the mix. Even altering the pavement's stiffness could improve the efficiency of vehicles using the road. Some of these changes could offer substantial reductions in the emissions of planet-warming CO2 and other pollutants. "There are all sorts of things that can be changed," says Jeremy Gregory, a sustainability researcher at the Massachusetts Institute of Technology (MIT) in Cambridge. "We're constantly looking for improvements."

Road design today is fundamentally the same as that used by the Romans. In general, a surface layer of pavement is laid atop thick layers of compacted granular materials that help transmit traffic loads to the underlying soil or bedrock. Modern pavement is typically made from either concrete, a mixture of aggregates such as sand, pebbles, and gravel that are bound together with cement, or "asphalt concrete," in which sand and gravel are bound together by a black, sticky petroleum byproduct known as asphalt.

Although cement concrete is typically much stiffer than asphalt pavements and is more resilient to wear and tear, it also tends to be more expensive. In many states, the department of transportation selects pavement materials based on initial costs rather than including long-term costs such as maintenance, so it's hardly surprising that about 94% of paved roads in the United States are capped with asphalt concrete or other types of flexible pavement.

Softer pavement certainly has its uses—not least when cyclists or pedestrians take a tumble (see A Softer Touch)—but flexibility can cause problems for road traffic. As a heavy truck passes across asphalt concrete, it creates a dimple in the road akin to the hollow produced when a person stands on a trampoline. The vehicle has to expend extra energy to climb out of the dimple as it moves, which decreases its gas mileage and increases its CO2 emissions.

Gregory and his colleagues have calculated that if US traffic volumes continue to increase as expected over the next 50 years, vehicles will generate an extra 2.66 billion metric tons of CO2 by climbing out of these dimples, in addition to the regular emissions caused by driving from one place to another. "It's clear that the way we design and maintain our nation's pavements affects the fuel economy of our vehicles," Gregory says.

Gregory's team estimates that using the stiffest forms of concrete or asphalt concrete could help to curb this dimple effect. Gradually replacing the nation's interstates, highways, and streets with these materials could cut the emissions related to pavement flexibility by about 18% over 50 years, amounting to a 0.5% reduction of total emissions from the entire transportation sector, the researchers say.

Although they did not include the additional CO2 emissions that might be generated by this reconstruction spree, Gregory says that their calculations underscore the basic principle that when it comes to fuel efficiency, stiffer roads are better.

PREVIOUS：A Simple Guide to Operating a Road Roller No next